Timberlake will headline a roster of megastars including Steph Curry, Tony Romo, Charles Barkley and Aaron Rodgers among the 90 sports and entertainment personalities. Athletes include 16 Hall of Famers and 22 active players – among them nine All-Stars – as well as an impressive list of actors and comedians.

A multi-talented performer, Timberlake is a singer, songwriter, actor, dancer and record producer. Throughout his solo career, he’s sold over 32 million albums and 56 million singles globally, making him one of the world’s best-selling music artists. Timberlake is the recipient of numerous awards, including ten Grammy Awards, four Emmy Awards, three Brit Awards, and nine Billboard Music Awards. According to Billboard in 2017, he is the best performing male soloist in the history of the Mainstream Top 40. Time Magazine named him one of the 100 most influential people in the world in 2007 and 2013.

Renowned for his boy band years in NSYNC to a spectacular solo career, Timberlake is a well-known golf fanatic. As part-owner of his home state Memphis Grizzlies NBA team, he is in his element at Lake Tahoe where big name sports celebrities have competed since the event debuted in 1990. Timberlake’s best finish from three previous appearances is 21st place in 2016.

The annual tournament has raised more than $5 million for multiple national and area charities and offers free admission to military personnel and guests. With major television exposure (NBC Sports, NBCSN, Golf Channel) and a purse of $600,000, the American Century Championship is the most prestigious celebrity tournament in golf. The 2019 event tees off Friday-Sunday July 12-14 at Edgewood Tahoe Golf Course, a Top 100 rated course on the shores of the largest alpine lake in North America.

Tickets are available at the gate for $20 each day Tuesday through Thursday, and $30 daily Friday through Sunday with  advanced tickets available online. Kids 10 and under receive free admission – limit two, when accompanied by a paying adult. Active Duty, Reservists, National Guard, Military Retirees, and Veterans receive one complimentary ticket and one complimentary guest ticket for each day. 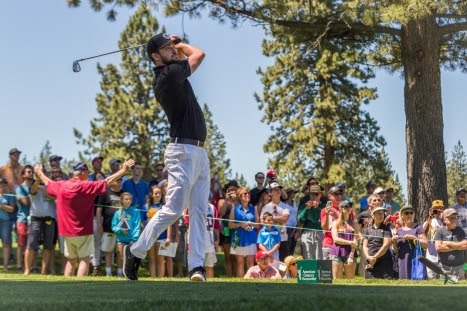 About the Lake Tahoe Visitors Authority
Designated the “America’s Best Lake” by USA TODAY readers (2012), Tahoe South combines the distinctive appeal of two worlds: spectacular natural beauty and a modern tourism destination with an array of outdoor recreation, entertainment, nightlife and gaming. Tahoe’s timeless splendor and an emerging economic diversity continue to define its inimitable personality. For information about lodging, recreation and family packages at Tahoe South, call 1-800-288-2463 or log onto www.TahoeSouth.com.